From LOL to fascism: “Internet culture”, the ideal culprit? 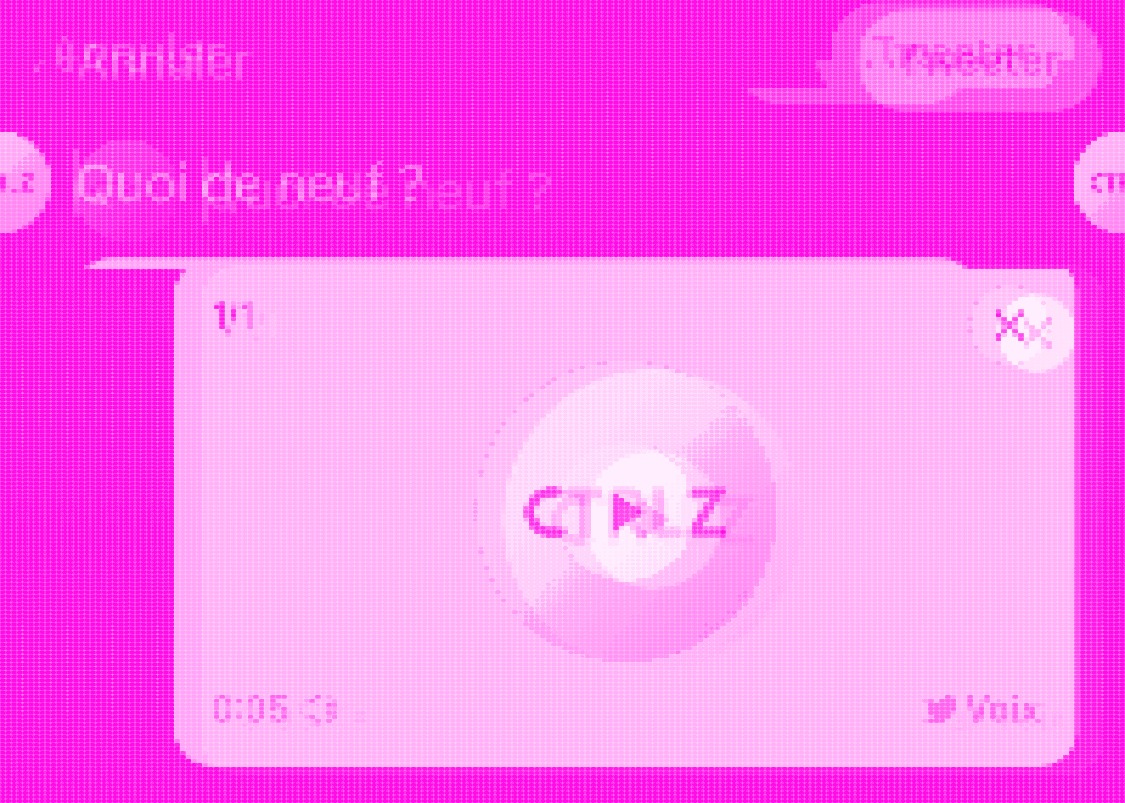 How to explain the failure of voice tweets

A recent article in The Atlantic believes that a certain tolerance for trash humour on the Internet in the late 2000s allowed the emergence of extremist ideologies in American public debate. This analysis, following the election of Trump in 2017, contains many blind spots. Critical reading of an article that has circulated a lot in the microcosm of journalism.

“What seemed entertaining and funny [on the Internet] ended up serving as a Trojan horse for violent and supremacist ideologies which were able to be disseminated without being recognised.” This observation is signed by Whitney Phillips, author specialising in digital ethics and assistant professor at Syracuse University, in New York state. It is taken from a long article published in late September by The Atlantic magazine and is a faithful summary. A few weeks before the U.S presidential election, the American monthly became interested, under the pen of Helen Lewis, in the potential links between a certain Internet culture of the end of the 2000s tinged with irony and derision, and the emergence of right-wing extremist movements threatening democracy.

Whitney Phillips was once a champion of meme culture—the jumble of images, jargon, and folk art that gushed out of 4chan, Reddit, and Tumblr. Now she thinks it was a Trojan horse for white supremacy. @helenlewis on why the lulz aren't funny anymore. https://t.co/sQqiU0K5st

Entitled The Joke’s on you, this analysis received on social networks in a mixture of praise and repentant mea culpa’s, was presented on Twitter in the following manner by an assistant editor-in-chief of Le Monde “could warning signs of the rise of U.S far-right groups, and more broadly that of the current political violence in the United States, be perceived in the irony, the culture of trolling and the memes from the 2010s ?”

If the interrogative form implies that the answer is undoubtedly more nuanced, a former deputy editor-in-chief of L’Express, was, for her part, more direct, summarizing the article like this: “How a culture of derision on the internet has not allowed us to see the radicalisation taking place, aka ‘From LOL to white supremacists really quick’”. To its credit, the article offers little alternative to this view, as its clear conclusion illustrates: “The consequences [of Internet culture] have ruined the lives of women. The consequences have terrified families at restaurants and worshipers in synagogues. The consequences are in the White House ”.

The shadow of 4chan

According to The Atlantic, Internet culture – a term referring to the frequent use of irony, sarcasm, in particular through the use of memes, content massively shared and remixed by Internet users on forums and social networks – could have the anonymous forum 4chan as its birthplace. This place of exchange of outrageous images and remarks, sometimes illegal, more LULZ* than LOL (to use digital slang), may have gradually shaped a vision of the world as biased as it is dangerous: “this culture swept away progressive policies, whose activists were suspected of having a victim mentality and, worse yet, no sense of humour. Too many women and minorities were fixated on identity politics even though, in their view, being a white man was not an identity but the default state of humanity. Not taking offence by sexism showed you were one of them”.

Several times in the article, various contributors with academic or journalistic profiles regret having given substance, through their past work, to spaces such as 4chan or even Reddit (site for sharing links on almost all subjects imaginable) divided into communities bringing out the worst and the best in comments sections. This awareness tinged with remorse increased with the election of Donald Trump in early 2017. The arrival at the White House of a troll not taken seriously enough by much of the left-wing intelligentsia “sparked a surge of introspection into what web hipsters had really been conditioned to tolerate, and with the complacent ‘partners in crime’ tone adopted by the media in their coverage of ironic hate speech”.

In short, the ironic-trash humour would have skewed the opinions of many leaders: they would have understood the initial second degree of this culture but underestimated the threat hidden behind the cynicism of online communities gradually plagued by real racists. To back up her argument on this harmful shift, the journalist does not offer any quantitative study on the evolution of the political opinions of followers of these forums nor on the absorption of information by pro-Trump voters. On the other hand, individual cases, ranging from the supremacist terrorist from Christchurch in New Zealand (51 dead in the attack on two mosques in March 2019) to the ex-hacker / troller who became webmaster of a neo-Nazi site are cited as evidence validating this theory, as the cultural practices of criminals sometimes brandished as definitive arguments about the danger of video games or gangsta rap.

Even though the article recognizes that the strategy of ironic pretence did not wait for the Internet to propagate extremist ideologies (e.g the Ku Klux Klan), several blind spots of the analysis can be deplored. At no time is the major role of platforms such as Facebook or YouTube highlighted in the propagation of conspiracy theories and hate speech by locking the Internet user into filter bubbles, according to algorithmic recommendations, such as was recently exposed by – with a sometimes regrettably catastrophic tone – the documentary The Social Dilemma by Jeff Orlowski, offered on Netflix.

Moreover, if we are to believe the article, anyone could conclude that the adoption of the offbeat codes of “Internet culture” is the preserve of the far-right, which is clearly contradicted by the plethora of influential groups (on Facebook, among others) of anti-capitalists, anti-fascists or anarchists – sometimes all three – daily publishing memes and shitposting as humorously as they are committed to the left.

The increased violence of political activism is not the prerogative of the far-right either: within the Bernie Bros (young men supporting Bernie Sanders) in the U.S as well as militants close to France Insoumise in France, the anathema, threats and harassment used to contradict or muzzle opponents are frequently denounced by those who are their victims. Moreover, these methods are not exclusive to so-called “extreme” movements, activists of the En Marche movement not being outdone in terms of aggressiveness on the networks. Generally speaking, the polarisation of electorates and increasingly violent “political marketing” techniques are ignored by the article, which never mentions the Cambridge Analytica case, as if the manipulation of personal data for electoral purposes had less influence than irony or the second degree in today’s global socio-political environment.

Another blind spot in Helen Lewis’s article: the minimisation of counter-power, in the face of racist ideologies, represented by the woke movement. Its only mention by The Atlantic portrays its rise as one of the reasons for the radicalisation of their right-wing opponents: “in contrast, social justice activists have often looked like party-poopers. The rise of social media has exacerbated fears of ‘we can’t say that anymore’, and a majority of Americans (including those belonging to racial minorities) believe that ‘political correctness has gone too far’. In this atmosphere, offensive jokes are turned into a “fight to the top”. The targets are no longer the oppressed minorities, but a small group of leftist elites wishing to impose on everyone a language as austere as an email from a human resources employee“. This summer however, in an article entitled How Capitalism Drives Cancel Culture, the same Helen Lewis, still for The Atlantic, did not deny the injustice of certain online lynching campaigns carried out by these same social justice activists.

Beyond these various weaknesses, the focus of the article on the ambivalence of an Internet culture accused of having perverted the “fun” ideals of its beginnings, is accompanied by a total invisibilisation of the traditional media, whose striking force in terms of amplification of hate speech nevertheless affects a wide audience. In France, for example, Eric Zemmour’s comments (television appearances, press articles and books) regularly cause scandal. This omission of the responsibility of traditional media was not to the liking of Mic Wright. This British journalist reacted to The Atlantic‘s article like this: “This paper gets praise from everyone and it drives me a little crazy. The boomer generation has given fascists far more spotlight than millennials or Gen Z. Here we see a relatively young person blaming their peers. This analysis appeals to the rest of the journalistic class because they want to blame everyone except themselves”.

* LULZ: In Internet slang, this derivative of LOL (laughing out loud) denotes a form of humour and derision often tinged with nastiness derived at another’s expense.